Tänak suffered a dramatic high-speed off on Friday morning

The Toyota Yaris debutant posted the benchmark pace through the 20.02km special stage from Curbans to Venterol, 20.0sec quicker than the Belgian. Although Neuville preserved his lead, the advantage over new second-placed man Evans was down to 5.4sec.

“Obviously it wasn’t so easy with very changeable grip but everything is working well and the notes were all good, so it’s fine,” said Evans.

Although conditions were easier than predicted as temperatures rose, there were several patches of tricky ice and Neuville was one of several drivers caught out. “It was on a corner full of ice. We had to restart so I lost a bit there. It was more slippery than I expected,” said the Hyundai i20 pilot, who was sixth fastest.

Sébastien Loeb was second quickest in another i20, the seven-time Monte winner retaining fifth overall behind third-placed Sébastien Ogier and world champion Ott Tänak in fourth.

Ogier was fourth fastest after swiping a bank with his Yaris, a handful of seconds slower than Tänak, who was another trapped by the ice. “We had quite a fancy moment! We hit black ice and were lucky we didn’t hit anything as there was an escape road,” said Tänak.

Esapekka Lappi was fifth in the stage to retain sixth place in his Ford Fiesta but the news was less good for M-Sport Ford team-mate Gus Greensmith. The young Briton slithered wide on a hairpin and down a bank, which is where he stayed.

Evans completed a clean sweep of victories in the morning loop of three speed tests to claim an 8.9sec advantage over Neuville, but the big talking point was Tänak’s crash on his Hyundai i20 debut.

The Estonian’s car flew off the road after a compression 9.2km into the Saint-Clément – Freissinières (SS4) test. The badly damaged car came to rest on a road more than 100m down the hillside. Tänak and co-driver Martin Järveoja climbed out of the car on their own before being taken to hospital for precautionary checks. 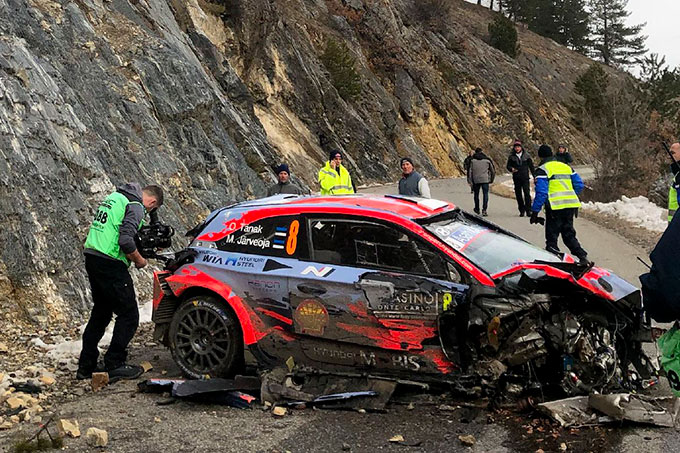 After winning the opening test, Toyota Yaris driver Evans demoted Neuville with fastest time in Saint-Clément – Freissinières. Another win in Avançons – Notre Dame du Laus sent the Welshman back to the Gap service park with a smile on his face.

“The feeling is generally pretty good in the car and the right tyre choice was made as well, so thanks to the team for that. It’s been great so far,” said Evans.

Neuville slowed his i20 briefly at Tänak’s accident but the Belgian could not improve on third fastest in both stages.

“We had a difficult opening stage in tricky conditions and I didn’t feel very confident, especially in the last part. It worked a bit better stage by stage, but conditions are going to be tricky this afternoon and we need to make the right tyre choice,” said Neuville.

Second in both stages enabled Sébastien Ogier to close the gap on Neuville to 0.8sec, although he was struggling for confidence on his Yaris debut. “I’m still learning the car and have to find the limit when it’s bumpy,” he said.

Sébastien Loeb was a lonely fourth in another i20, the seven-time Monte winner hampered by gravel dragged onto the road by his rivals in front. He was 38.7sec behind Ogier and 41.5sec clear of Esapekka Lappi’s Ford Fiesta.

Lappi dropped 10sec after sliding into a field in Avançons – Notre Dame. The Finn had 24.6sec in hand over fellow countryman Kalle Rovanperä, who enjoyed a clean morning on his Yaris debut to hold sixth.

Takamoto Katsuta was more than two minutes further back in seventh, ahead of WRC 3 leader Eric Camilli. Ole Christian Veiby was ninth, and leading WRC 2, with Nicolas Ciamin completing the leaderboard.

The Frenchman, making his Toyota Yaris debut, ended the first full day’s competition with a 1.2sec advantage over Elfyn Evans after demoting his team-mate in the final kilometres. Thierry Neuville was hot on their heels, a further 5.2sec behind.

The main talking point was a massive crash for world champion Ott Tänak on his first drive in a Hyundai i20.

The Estonian’s car flew off the road after a compression in this morning’s Saint-Clément – Freissinières speed test. The car rolled multiple times before coming to rest on a road more than 100 metres down the hillside.

Tänak and co-driver Martin Järveoja climbed out of the badly-damaged car on their own before being taken to hospital, where they will remain overnight for observation.

“Our priority in such situations is always the condition of the crew first and foremost,” said Hyundai Motorsport team principal Andrea Adamo. “It is customary after such incidents for hospital check-ups, the results of which were clear.”

The Toyota duo dominated the day. Evans, also making his Yaris debut, won all three morning tests, where icy patches were a constant hazard, to relegate overnight leader Neuville and open a 3.3sec margin over Ogier.

Ogier turned the tables this afternoon. On drier roads, he won two stages to edge ahead.

“This morning I was a little bit cautious and was also having cautious information from my gravel crew,” he said. “This afternoon we made some changes to the set-up and had a talk with our gravel crew and we were feeling more comfortable.”

Evans admitted to a wary approach this afternoon as mud was dragged onto the road by the cars ahead.

Neuville won the final stage but was frustrated to drop down the order. He was forced to call-up non-competing team-mate Dani Sordo to drive his safety note car after regular pilot Bruno Thiry fell ill.

Sébastien Loeb was a lonely fourth in another i20. The nine-time world champion was 47.5sec adrift of Neuville and 48.3sec clear of Esapekka Lappi, who struggled with his Fiesta on his M-Sport Ford debut. The Finn also lost time after sliding into a field.

Teenage wunderkind Kalle Rovanperä avoided any pitfalls en route to sixth in his first appearance in a Yaris, with the similar car of Takamoto Katsuta in seventh.