Revealed: the Toyota Yaris WRC and drivers for 2017 season

With the start of the 2017 FIA World Rally Championship (WRC) in Monte-Carlo, Monaco just over a month away, TOYOTA GAZOO Racing WRC is putting the final touches on its preparations for an event that the team has eagerly awaited. Thousands of hours in the workshop, testing program and a great deal of teamwork have filled the days of TOYOTA GAZOO Racing WRC for more than a year.

Everything has been focused on a single goal: being ready at the start of the Rally Monte-Carlo.

Participating in WRC, which is the pinnacle of rallying, will definitely provide Toyota with new challenges and opportunities to further develop its people, explore new technologies, and experience various road conditions around the world, thereby contributing to making “ever-better cars”.

Today, it is my great pleasure to present the car to compete in WRC, with our team and partners. I would like to express my gratitude to, and respect for, the those fans who waited 17 years for this day and also all the rally organizers, participants and automakers who have safeguarded and furthered the sport of rally during our absence. Thanks to all of you, we’re back here.

Both people and cars are trained and strengthened when they are exposed to conditions that exceed the imagination during competition. TOYOTA GAZOO Racing “hates” to lose, and of course we do not want to lose in WRC. The other day, I had a chance to drive Yaris WRC with Tommi and could share a feeling of confidence in our ability to compete with this car. We, including members from Finland, Germany, and Japan, will be doing our very best throughout this final month so that we can—as quickly as possible—assure fans that “Toyota is back”, or “I am glad to be Toyota’s fan” and by putting smiles on their faces. I hope we’ll have your support.

— The Yaris WRC: A new generation of World Rally Cars

The Yaris WRC has been developed complying with the requirements of the FIA technical regulations for the 2017 season, and it is part of the new generation of World Rally Cars that will add a new dimension to the sport’s top-flight category in upcoming seasons. Equipped with a 1.6-litre direct injection engine, it has 380 horsepower under the bonnet and impressive design thanks to the freedom allowed by the regulations in terms of aerodynamics. The Yaris WRC has been designed, built and developed by a team of experienced engineers made up of Tom Fowler, Simon Carrier and Mikko Ruoho.

“The Yaris WRC is a well-designed car with incredible potential,” revealed Tommi Mäkinen, Team Principal of TOYOTA GAZOO Racing WRC. “The new regulations allow for much greater freedom in terms of development. Although we have yet to explore all the possibilities, we can say that the car is reliable and quick. I really can’t wait to see the results in racing conditions.”

— A team of complementary drivers for the first season

Two Yaris WRCs, driven by Jari-Matti Latvala and Juho Hänninen, will contest the opening round of the World Rally Championship in Monte-Carlo on 19 January of next year. Esapekka Lappi, Finnish young driver who won the WRC 2 Championship this year, will also join the team through the season as a test driver.

Since contesting his first WRC rally in 2002, Jari-Matti Latvala has continued to impress and ended the 2016 season with 16 WRC wins to his name. With 169 starts under his belt and a three-time runner-up in the World Rally Championship alongside co-driver Miikka Anttila, Jari-Matti is without question one of the best drivers in WRC. His invaluable experience at this level and his level of performance will give the TOYOTA GAZOO Racing WRC team real impetus for the 2017 season.

“I started my rally career in a Toyota Corolla GT back in 2001 and my first competitive outing in a World Rally Car was behind the wheel of a Corolla WRC in 2003 in Estonia. So in many ways, it feels like I’m coming home! I’m really happy to join the TOYOTA GAZOO Racing WRC team from the very start and lead this new adventure with them. I feel lucky to be part of this story and I hope we will amass a lot of victories in it.”

Juho Hänninen: The strength of experience

Juho Hänninen, who will be competing for TOYOTA GAZOO Racing WRC alongside co-driver Kaj Lindström, took part in the development of the Yaris WRC from its very first outing. His considerable WRC experience and his knowledge of the car will make him an undeniable asset for the team.

Newly-crowned WRC 2 World Rally Champion, the young Finnish driver has impressed with his turn of speed, his calmness and his ability to adapt. After cutting his teeth in R5 category cars in the European Rally Championship and developing his skills on the world stage in the WRC 2 Championship, the Finnish driver is now ready to take on a new challenge. He will be appointed as test driver for the TOYOTA GAZOO Racing WRC team.

"This is a tremendous opportunity for me and my co-driver Janne Ferm. It’s a dream come true. We have both worked so hard over the years to get to this point and finally, it’s here. We’re excited and motivated about joining the team, and we’re extremely grateful for this opportunity. I can’t wait to start our testing program together with TOYOTA GAZOO Racing and the Yaris WRC."

When I attended the WRC in Finland in July 2014 as a spectator, many fans asked when Toyota would be returning to the rally.

Six months later, we decided to return to WRC, and today it is my great pleasure to present the car to compete in WRC, with our team members who have prepared for it and the partners who have supported us in that effort.

I was extremely surprised and delighted that even after more than 10 years, many people remembered that once Toyota competed in WRC.

First, I would like to express my gratitude to, and respect for, the those fans who waited 17 years for this day and also all the rally organizers, participants and automakers who have safeguarded and furthered the sport of rally during our absence. Thanks to all of you, we’re back here.

At the same time, I’d like to take this opportunity to express my respect for everyone who created a strong bond between rally and Toyota and etched that bond into people’s memory, including the late Ove Andersson, who launched Toyota’s team in the 1970s and led since then; the late Björn Waldegård, who catapulted Toyota to fame in WRC in the 1980s; and Carlos Sainz, Juha Kankkunen, and Didier Auriol, who captured drivers’ championships for Toyota in the 1990s.

Because they involve competition on all types of roads, rallies are the optimal stage on which to hone the capabilities of both people and cars. Toyota has not been seen on that stage for a long time, but I’m truly happy that we’re back.

Both people and cars are trained and strengthen when they are exposed to conditions that exceed the imagination during competition.

Tommi Mäkinen has won the WRC events numerous times, and he has the experience of competing in a variety of cars, including Mitsubishi and Subaru entries.

Precisely because we understood that Tommi could give Toyota a variety of experiences that were unimaginable until now, we asked him to lead our car- and team-building effort.

As I said after this year’s 24 Hours of Le Mans endurance race, TOYOTA GAZOO Racing “hates” to lose. Rest assured that the same attitude applies to WRC.

The other day, I had the pleasure of sitting in the driver’s seat of our Yaris WRC and driving the car a few miles with Tommi.

Perceiving the car’s sound and smell, the feel of the steering wheel and pedals, and, more than anything else, the look on Tommi’s face, I was able to share with him a feeling of confidence in our ability to compete with this car.

We, including members from Finland, Germany, and Japan led by Tommi, will be doing our very best throughout this final month, right up until the WRC begins, so that we can—as quickly as possible—assure long-time fans that Toyota is back as the king of this kind of event and put smiles on old and new fans’ faces by affirming their choice to support our team. I hope that you’ll support TOYOTA GAZOO Racing, a team that hates losing more than anything else, as we compete in the WRC. 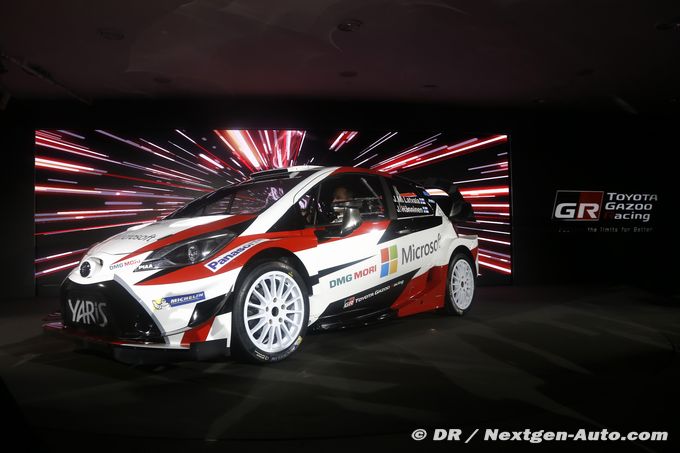 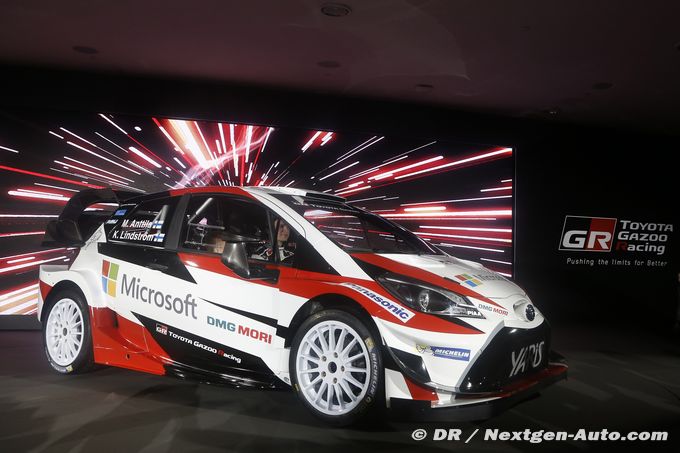 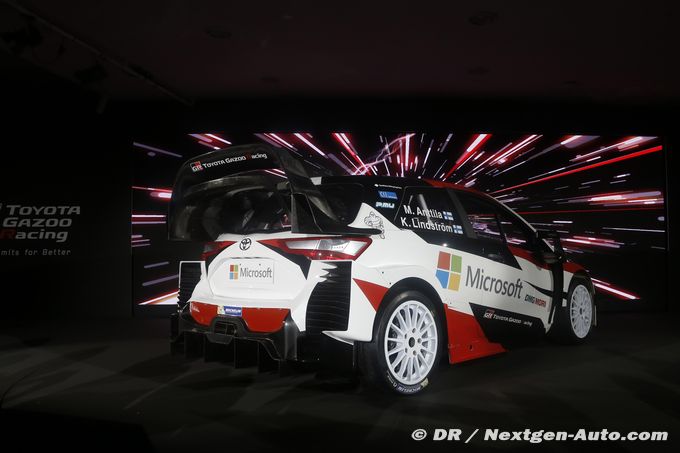 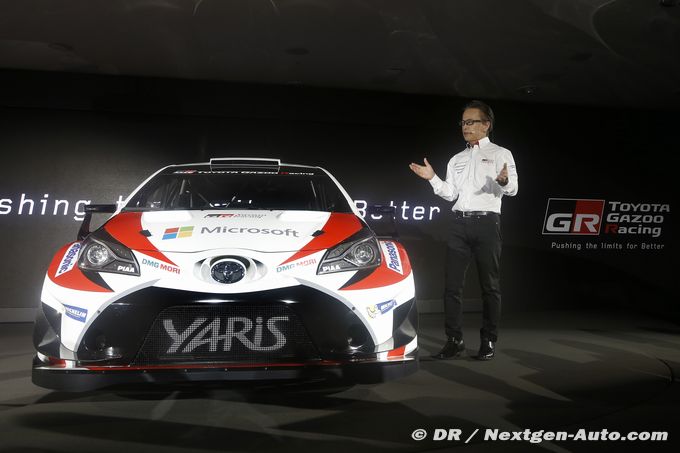 Vila Real circuit voted the best by the fans